A really great LinkedIn article by David Stephenson, Ph.D., on why business leaders are underwhelmed about the quality of tangible output from data analytics can be found here (a LinkedIn subscription is required). 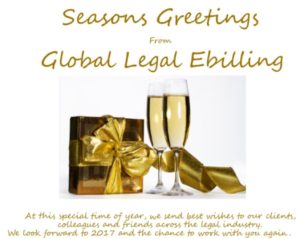 Bloomberg Law has offered an excellent White Paper called “Privacy Laws Around the World” that is available for download with registration here.

Having been involved with legal ebilling for so long, I have always been interested in articles on fraud associated with legal billing.  Hand-in-hand with this are articles that track embezzlement within law firms or law departments.  With the technology available in this day and age I am amazed it still occurs and am perplexed by the arrogance of anyone who thinks they can get away with it.  The Global Legal Post reported today on an instance where a former law office manager in Australia pled guilty to siphoning A$2.1M (!!!) from two trust accounts managed by her former firm between 2007 and 2015. Simply unbelievable…

A new tool has been released by Smart Time Apps called EBillReady that is designed to perform pre-invoice submission validation.  By increasing the accuracy of first time invoice submissions the tool helps to create a more efficient and less costly workflow.

The cloud-based system allows for creating validation tests based on client outside counsel guidelines and, by importing a LEDES file, will identify issues and provide a means to easily edit the ebill.  To learn more go to their web site.

Linklaters has published an excellent White Paper on The General Data Protection Regulation.  Changes associated with this regulation go into effect in Europe in May 2018 and represent “the biggest shake-up to Europe’s privacy laws for 20 years.”  The paper is available here.

As a legal technology consultant, I see value in an offering like this.  Particularly when undertaking a systems selection, an organization is able to receive unbiased information on the security of systems under consideration.  Sure, you can ask questions on the security of a platform in an RFP, but all too often RFP respondents answer the question they want to answer, not necessarily the question asked.  As we move into an age were security is a greater concern than ever before, an offering like Prevalent is well timed for success.

Over the years I have had hundreds of conversations with people on issues with electronic billing.  As President of the LEDES Oversight Committee, a standards organization, I have been at a loss on how to respond to the suggestion that the LOC should force compliance with standards.  In these conversations the third party ebilling vendors often are portrayed as the villain, but I know they agree that using un-customized standards is preferable.  Yet I understand how difficult it is for law firms required to ebill to juggle all of the crazy custom requirements against workflow and the limited window during which invoices can be submitted.

In one Monday ILTA session it was stated that the LOC needs to (1) work towards making all ebilling standards available in all third party vendor systems, and (2) sway public opinion against customization.

I believe I’ve reached a tipping point in this discussion.

At the mid-year LEDES Oversight Committee members meeting, I declared that it is time to disrupt the ebilling status quo.

The LOC Board of Directors will establish a framework to gather information on the “issues” and we will then form groups to address as many of these that we can.   We need volunteers on several levels.

Actually, we already have started.  One current initiative is to standardize the error messages returned by the third party systems so that users understand the error and how to correct it, as well as to create a format for the download of this type of information from the system to the party submitting ebills.  Another initiative is investigating how the various systems handle taxes and rounding issues and, once this is understood, will consider alternatives to standardize the process.

This initiative is open to members of the LEDES Oversight Committee.  If you are willing to participate in disrupting the status quo, Contact the LOC to volunteer.  If you’re not already a member, join the LOC.  At $95/year, it is the best association value in legal!

Jane Bennitt will participate as a panelist in another ILTACon session on Monday, 29 August (law department day) at 1:00. The session is entitled “Matter Management: The Keystone to the Pyramids” and will focus on the various matter management solutions available in the marketplace today.

It is with great pleasure that we announce GLE’s Jane A. Bennitt is again President of the LEDES Oversight Committee, a position she previously filled from 2006 through 2014.